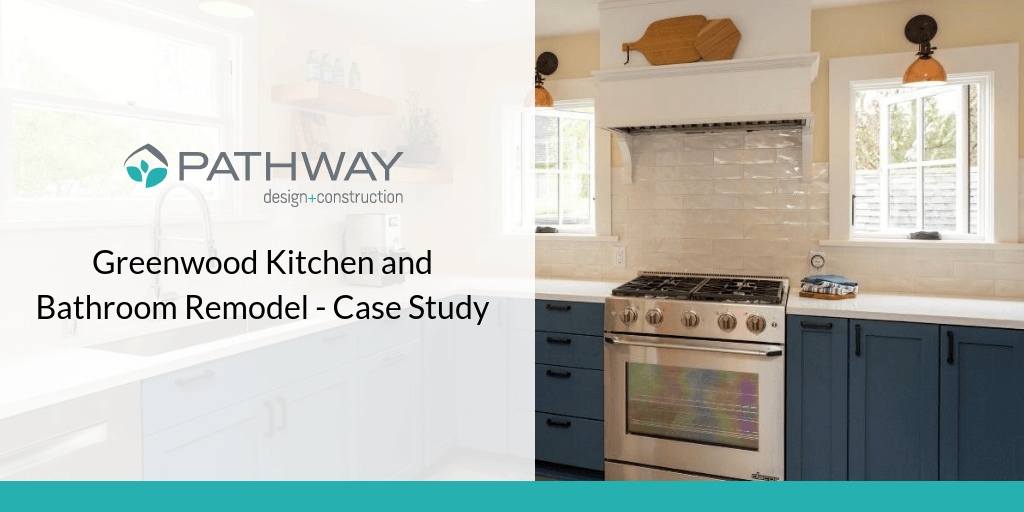 Join us for the following case study to learn how the Pathway Team works with the client from day one to assess the goal, outline and deliver the project and over-exceed client expectations.

​This couple was looking to remodel their bungalow-style home but didn’t really know where to start, except they knew for sure they wanted a shower. Fortunately for them, they found their interior designer, Raina Henderson Interiors, on the Houzz platform.

Kayla noted, “It was very important to us to fix the pre-existing layout issues and to have a house that felt cohesive. The existing kitchen layout was so dysfunctional.

While certainly, some smaller improvements would have helped, moving the location of the basement stairs allowed us to have a fully functional kitchen and a house flow that just feels right.”

“The last thing we wanted was to invest in a remodel and come out having regrets at the end.”

​It was important to meet with Raina and talk, prior to beginning to develop a bid, about different ways to approach what was wanted and needed in the project.

Originally, the full scope of the project was a lot of lower-level retrofitting for the structure, moving the stairs, and also putting in the new bathroom and remodeling the kitchen.

Together, we developed a more clarified, phased approach. Then we were all able to proceed with real numbers for specific projects. 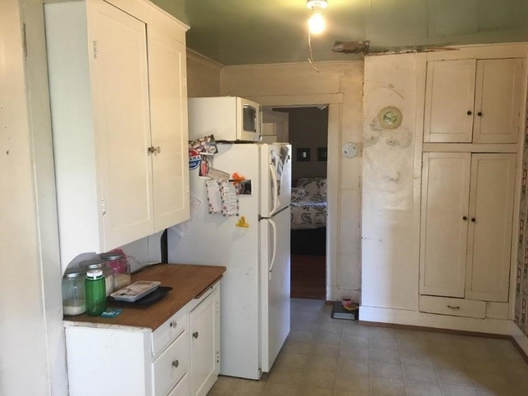 Once selected as the build firm, weekly project meetings were incorporated. They were held at the same time, on the same day of the week, for the life of the project and included the interior designer (Raina), the clients and the lead carpenter so that:

​There was a descending staircase at the back of the kitchen from a previous expansion project. This was filled in, then a new staircase was built underneath the existing ascending staircase for better use of space. This intentional move was done during Phase 1 as a way to best prepare for future basement and 2nd-floor renovation projects.

Raina had worked with an architect to plan that out, so the documents were all in place and ready to go when it came time for construction and build out work to begin. It was an efficient and effective way to prepare.

​A larger beam was needed for more structure support between the dining room and kitchen. We were going to cover it, but keeping it visible was appealing to Cameron, who works as a mechanical engineer.

The design solution was to make it a feature and have it tie into the floors and other cherry wood highlights, such as on the floating shelves in the kitchen.

“The end result of this successful design project is due to the implementation of  weekly site meetings, the commitment to listen and get to know the homeowners really well and the willingness to make modifications during the course of the job that added interest to the overall project” – Paul Kocharhook, Owner of Pathway Design & Construction 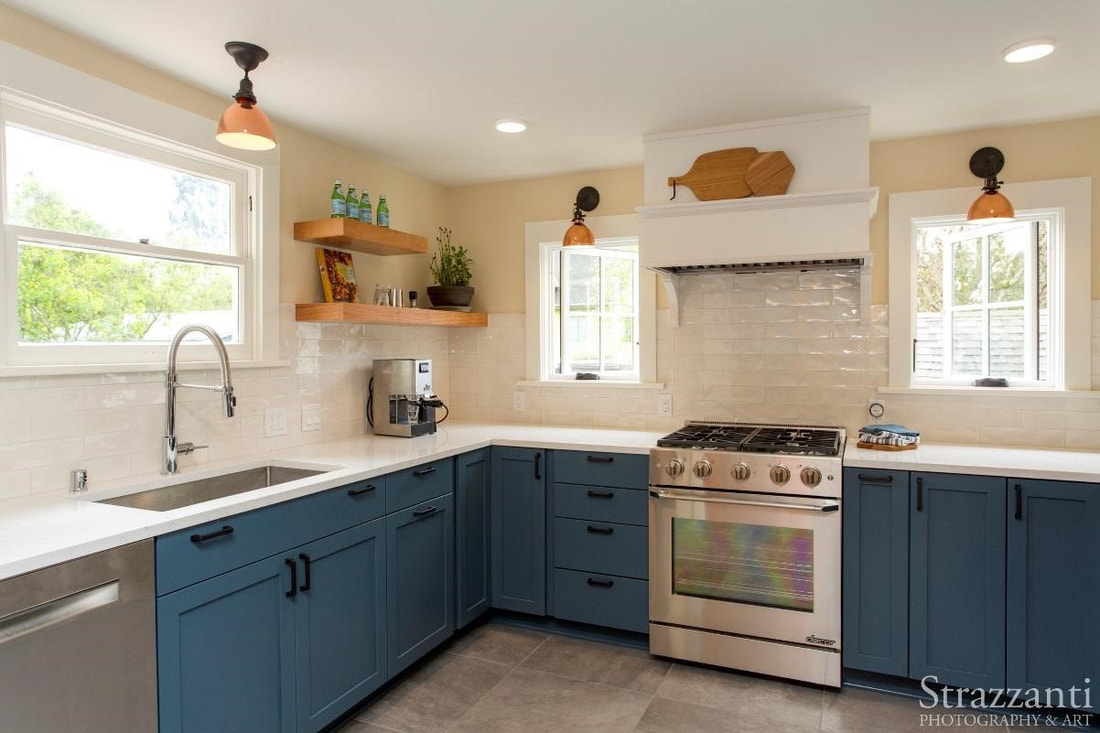 Challenges due to low ceiling height

There was a low ceiling height to contend with, and it posed a few design challenges. Add to this, the fact that Cameron is a very tall man, standing at about 6’4”.

Due to the way the roof was situated and built, recessed can lighting couldn’t be utilized. Raina suggested the use of a specific fixture that look really good and help the space to feel bigger, without Cameron having to crouch or worry about walking into anything.

There were also some limitations on the hood over the range because of the low ceiling height. The hoods that were manufactured were too large in scale to the space available, which would have made it seem awkward and “off.”

​Raina used her design skills, as well as her creativity, to develop a custom hood perfectly. She utilized raw materials, specifications for scale and client preferences, plus the help of a local carpenter to make this custom piece. 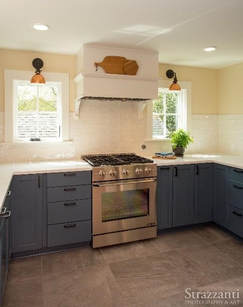 ​The brand-new master bath was created when we reworked an odd space from a previous kitchen expansion. By adding a bathroom to the main floor, the client enjoys more convenience but has also added value to their overall property, which we believe will serve them in the long run.

Cameron and Kayla salvaged an upstairs bathtub for use in their new bathroom.

When we say “bathtub” we actually mean a 700-lb, full cast-iron clawfoot tub. It took 3 big guys, and one woman, Kayla, to bring it downstairs to the first level.

And it was Kayla who helped prep this tub so it could be refinished, then painted. 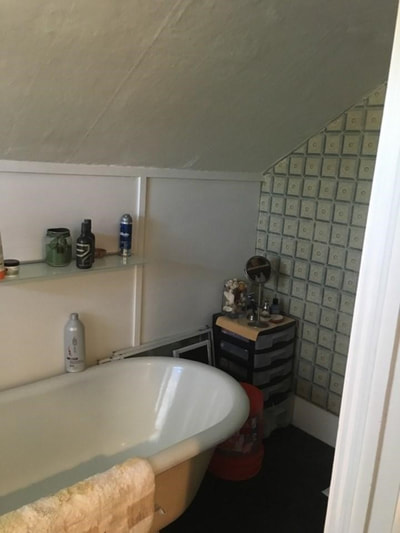 A small detail that made a big difference

​One small detail about the new bathroom that Kayla just loved was the custom flower pattern in the hex tiles on the floor. Raina worked with the tile setter to place the patterns in specific places, which really delighted the client. 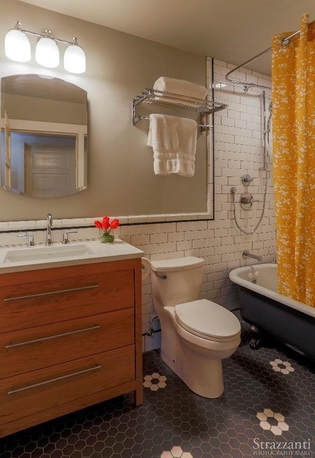 What about green methods and materials?

In addition to the salvaged, 700-lb clawfoot tub, we used low-VOC (volatile organic compound) paints and finishes on the woodwork and cabinetry throughout this project.

A no-maintenance grout was also incorporated, which doesn’t require sealing.

Other sustainable elements of this project were the conscious use of local wood and cabinetry resources, which minimized gasoline, packaging and other travel costs of shipping. 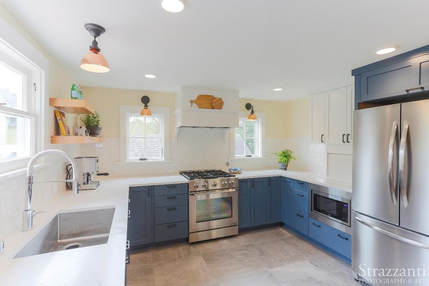 Better use of the dining and backyard

​A really unique part of the project actually tied the kitchen, dining room and backyard together for better access and use of all three spaces in a really simple way.

The entry to the dining room from the kitchen was opened up.  In the original dining room, there was a big window, but Raina saw more potential there for backyard access. We took out the window and widened the opening and installed french doors.

Outside, a little “decklette” was built and paired with stairs leading down into the backyard, instead of making a wide set of stairs.

The clients were really happy with this feature. They can sit and sip coffee on quiet mornings on their little deck. And there’s also better flow between the kitchen, dining room and yard when friends and family are visiting.

​We actually got to “test it out” at an after-project BBQ the client threw a few weeks after the Phase 1 renovations were completed.

The clients invited everyone (and their families) who worked on the house, to come and enjoy the finished space in celebration.

All the teams, crews, vendors, tradespeople were invited and appreciated. This is what can happen when a collaborative, communicative approach is utilized throughout a project.

Also, shout out and gratitude to Raina Henderson Interiors for bringing us aboard this project and collaborating with us through to completion of Phase 1 for this special client!

We followed up a few months later to check in with Kayla and Cameron about how their remodel was working and feeling. Here’s what they said:

“We still walk around this place sometimes and think about how lucky we are and how much we appreciate your hard work.”

“One thing that still strikes me about this project is that it all started because we just wanted a shower in our house.

The original house was built without indoor plumbing and the way they retrofitted a bathroom into an upstairs closet didn’t allow for a shower because of low headspace. So we started thinking about how we could work a shower into the house somewhere.

Like most remodels, the construction sequences stacked up to point where a simple shower became a nearly whole-house remodel. We spent years preparing and planning for the project, then Pathway and Raina made the whole project happen in 4 months.

Pathway had a good reputation, so I expected them to be efficient, talented, and communicative. But they impressed me even more by being charismatic, friendly, and very reasonable. Any construction issues (of which there were few) were handled professionally and we were always happy with the resolutions. We were really lucky to get Pathway for the job and we continue to be thankful for their hard work.”

​Review another kitchen project, or the Leschi master bath for ideas and to get a sense of what it’s like to work with Pathway Design and Construction.

View all posts by Olga Lockhart →